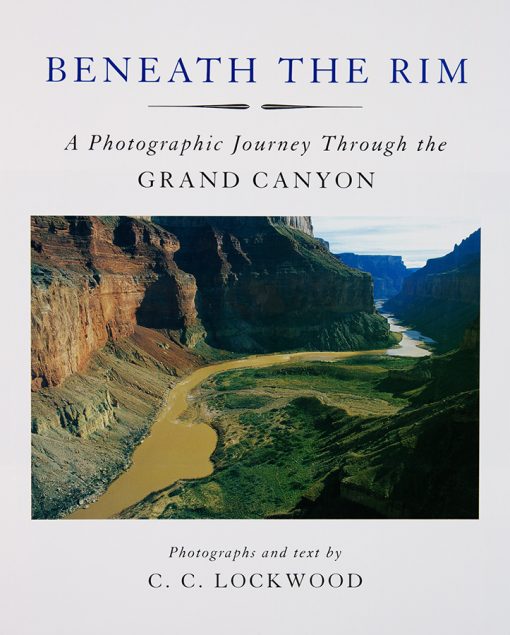 A Photographic Journey Through the Grand Canyon

In 1989, when award-winning nature photographer C.C. Lockwood headed west on a shoot, a friend in Kanab, Utah, insisted that he photograph a Grand Canyon sunset from the Colorado River. Thus, this ardent adventurer made his first trip down the waterway, from Lee’s Ferry to Pearce Ferry, and discovered the splendor of the Grand Canyon from the perspective of a boatman.

His curiosity piqued, Lockwood began teaching photography workshops for a Colorado River expedition company, eventually making more than a dozen trips down the rushing, rapids-laced stream. He was fascinated with his surroundings: the subtle differences between Soap Creek Rapid, Serpentine Rapid, and Crystal Rapid became apparent, as did the fine line that differentiates Muav Limestone from Redwall Limestone. Gradually, every bend in the river was imparted with meaning.

As is always the case with images from the camera of C.C. Lockwood, the 150 color photographs here astound. Included are dazzling shots of the sunrise over Cedar Mesa and sunset from Fire Point, a majestic picture of the Royal Arch and Spire, a delightful peek at Elves Chasm, and breathtaking views from Lava Canyon and Crazy Jug Point. Captivating animal photographs, ranging from a raven scavenger at River Camp to a Grand Canyon rattlesnake to bison enjoying a dust bath, demonstrate that the wildlife enthusiast in Lockwood is also present in these pages.

Beneath the Rim allows the reader to embark on vicarious adventures with Lockwood as their fearless guide: riding the Lava Falls Rapid, trout fishing in Nankoweap Creek, hiking in Saddle Canyon, bathing in Travertine Canyon. He stops at Granite Gorge, the Blue Moon Bench, Navajo Falls, Vasey’s Paradise, and Marble Canyon. Seen on the fantastic journey are ravishing images of a mighty thunderstorm over Conquistador Isle, a brilliant rainbow over Stone Creek Canyon, and glorious shafts of sunlight through a rainstorm at Cardenas Creek.

With his absorbing text and awesome photographs, Lockwood provides a glimpse of a panorama that – as described by Clarence Dutton, a geologist who named most of the towers and buttes in the Canyon – “at first bewilders and at length overpowers.”

1 review for Beneath the Rim