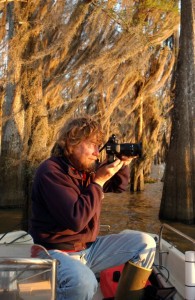 Wildlife photographer C.C. Lockwood has lived and worked in fragile ecosystems whose preservation shapes his artistry. Through words and images, he has captured the unique sense of space in wild places as diverse as Louisiana swampland and the rugged back country of the American West. His work has earned him international acclaim as an environmental artist, including the Sierra Club’s Ansel Adams Award for conservation photography. Lockwood’s work continues to reflect changes and perils in the natural world. His eleventh book, Marsh Mission, is part of a years-long effort by Lockwood to bring attention to the crisis of vanishing Gulf Coast wetlands. His newest book, Louisiana Wild, The Lands Protected and Restored by The Nature Conservancy, portrays the good work this organization is doing on over 280,000 acres of land in our state. C.C. said, “I felt like a kid in a candy store, when I started this project, for I got to visit swamps, lakes, marshes, prairies and oyster reefs form the Arkansas border to the Grand Isle wetlands.”

Future projects include books on sunsets, beaches, and dogs. He is also working on a sustainable agriculture project. He will soon produce a digital book on birds for handheld media machines. Most recently C.C. ‘s iconic image, “Flat Lake Sunset,” has been chosen by the USPS to be the official bicentennial stamp. 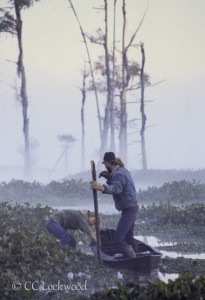 Lockwood is a frequent speaker on wildlife, conservation photography and environmental issues at national, state and local conferences 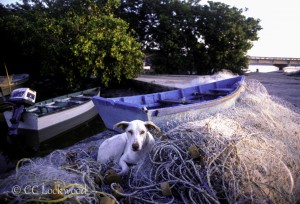 A dog rests in his master’s fishing nets

C.C. Lockwood was born in Kansas City, Missouri, in the late 1940’s and grew up in Fort Smith, Arkansas, where he graduated from Southside High School. He moved to Louisiana in 1967 to attend Louisiana State University, where he received his B.S. in Finance in 1971. During his early years in Louisiana, he fell in love with the state’s swampy backcountry, and he abandoned plans for a career in business as soon as he graduated. He taught himself photography and headed for wild places, determined to make a living capturing images of nature. Much of this time has been on a houseboat.

He has been married to Sue Richardson since 1996.