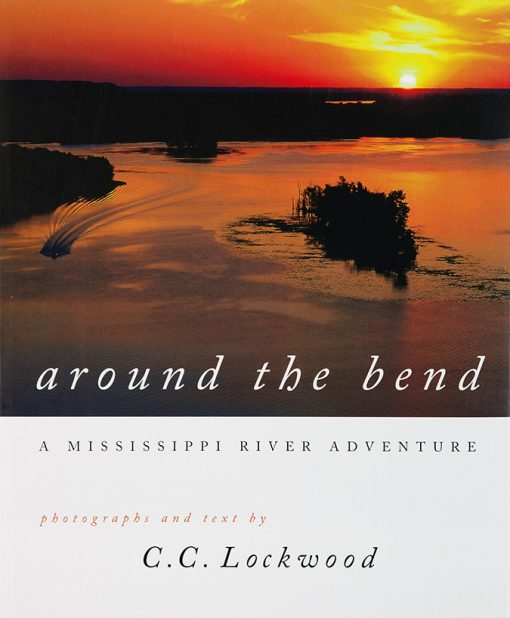 Around the Bend Book

A dazzling portrait of America’s most famous waterway: In the summer of 1997, renowned nature photographer C.C. Lockwood embarked on a remarkable adventure. First by canoe and then by Grand Canyon style pontoon raft, he journeyed the length of the Mississippi River from its source at Lake Itasca, Minnesota, to its mouth at the Gulf of Mexico. Armed with his camera and computer equipment to transmit stories and pictures to school children, high-tech Huck Finn trained his lens on spectacular scenes, creating images that vividly depict the life pulsing in and near this vital American artery – water and lands that touch the lives of every American.

As Lockwood shows in these brilliant color photographs, the river has many faces. At its birthplace it is nothing more than a trickle among rocks. But as it serpentines south, it slowly grows until, at its end, it pours daily over 420 billion gallons of water into the Gulf of Mexico. Lockwood captures the river in all of its moods: a ghostly foggy morning on the bank; a bright orange sunset over the bends; a quiet snowfall at the headwaters; a sudden rain shower at dusk. He offers intimate images of the creatures that make their home in the river or along its shores: a whitetail fawn nestled in underbrush; a curious frog peeking out from beneath reeds; a Canadian goose marching in line with her goslings; turtles burying themselves in mud. Lockwood’s depiction of the natural beauty of Old Man River is unparalleled.

Lockwood also introduces the people, both ordinary and extraordinary, that together make the river a thriving community. We met, among others, a performance artist intent on swimming the river’s length; inhabitants of a makeshift houseboat colony near Winona, Minnesota; Tom Sawyer and Becky Thatcher look-alikes in Hannibal, Missouri; and Willie P., who, with the help of thirty-gallon plastic barrels and paddle wheels, employs a most unusual mode of river transportation – a Toyota Celica hatchback.

Be the first to review “Around the Bend Book” Cancel reply