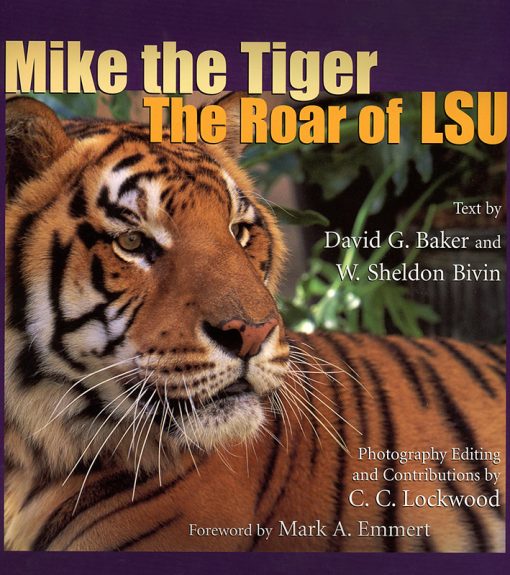 A colorful history of LSU’s long-lived mascot. Mike the Tiger has symbolized the spirit and resolve of Louisiana State University for nearly seventy years. Fiercely confident, keenly competitive, and marvelously clever, he reigns nobly from his home just outside Tiger Stadium. LSU fans proudly vaunt the superiority of their mascot, but few may know the complete history of the “Mikes” who have intimidated opponents and inspired the faithful since 1936.

In this delightful volume, David G. Baker and W. Sheldon Bivin, Mike’s most recent veterinarians, combine behind-the-scenes anecdotes with more than one hundred vivid period photographs to tell the never-before fully told story of “the roar of LSU.” After explaining the Civil War origins of LSU’s fighting tiger tradition, the authors chronicle the reigns of each of the five Mikes: Mike I (1936-1956), who enjoyed late-night joyrides through Baton Rouge courtesy of his student caretakers; Mike II (1956-1958), who legend says was actually two tigers; Mike III (1958-1976), the only tiger to witness a national championship football season; Mike IV (1976-1990), who both escaped his habitat and was held hostage in it; and Mike V (1990-present), reported to have the most amiable personality to date.

Throughout the book, Baker and Bivin offer fascinating details about the unique challenges of keeping a school icon that is still very much a wild animal. They also cover the basic facts about tigers and their conservation. An entertaining history of a remarkable living tradition. Mike the Tiger is a treat for all who will forever bleed purple and gold.

The new edition is hardback and has a new cover, picture coming soon.

Be the first to review “Mike the Tiger Book” Cancel reply