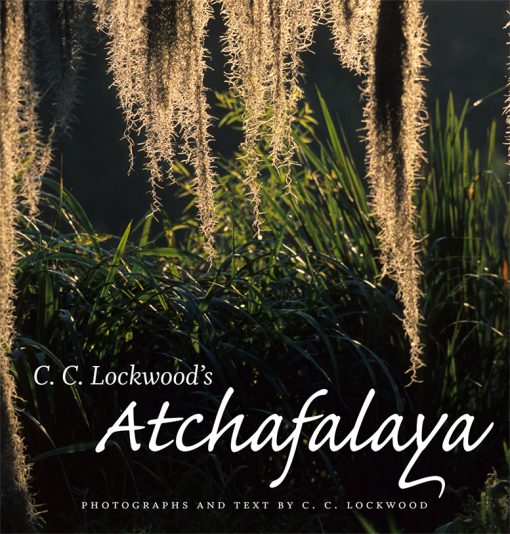 A stunning intimate portrait of America’s most majestic river basin

At nearly 1.4 million acres, the Atchafalaya Basin in south central Louisiana comprises America’s largest swamp wilderness, five times more productive than the Florida Everglades. Award-winning nature photographer C. C. Lockwood is the foremost chronicler of this natural treasure. What began as a commercial photography assignment in 1973 became a decades-long love affair, and for more than thirty years, Lockwood has explored the Atchafalaya’s waters and captured its haunting beauty on film. Now, twenty-five years from the publication of his first book on the area, Atchafalaya America’s Largest River Basin Swamp, he returns to his favorite subject in C. C. Lockwood’s Atchafalaya. His passion for the Atchafalaya as expressed in his photographs can be compared to John James Audubon’s exuberant appreciation for the state’s abundant bird life as depicted in his prints more than 150 years ago. The art of both exalts Louisiana’s wildlife—and cautions against taking it for granted.
Lockwood revisits and reflects on the places he has frequented most in the swamp, recalling his escapades both long past and recent among gators and skeeters. He shares the thoughts of basin residents about how the Atchafalaya has changed over time, for better and for worse. Increases and decreases in various bird and other animal populations, changes in water levels and consistency, flora mainstays and trees gone missing, burgeoning aquatic vegetation—all are keenly observed by this explorer. Lockwood finds undiminished the seductive seasonal and diurnal moods of the swamp: Autumn and spring, sunset and moonrise, as breathtaking now as in the past.

In ninety seven dazzling color photographs, Lockwood brilliantly documents the Atchafalaya’s timeless beauty. He shows amazingly diverse and abundant wildlife, rookeries with thousands of egrets and herons, waters with billions of crawfish, and ridges with deer, squirrel and woodcock. Waters run deep in Lockwood’s soul, as evidenced in his intimate treatment of the meandering bayous fringed with bald cypress trees, the many glassine lakes reflecting vegetation into double images, and the mighty Atchafalaya River—the lifeline of the swamp.

“No place in the world gives me such a feeling of peace as America’s largest river basin swamp,” writes Lockwood. In the pages of this valentine of a book, he pays homage to the queen of U.S. wetlands.

C. C. Lockwood is an award-winning natural history photographer who enjoys studying his subject over the course of at least one year through on-site living. Among his many other photography books are Around the Bend: A Mississippi River Adventure; Still Waters: Images, 1971–1999; The Alligator Book; and Marsh Mission: Capturing the Vanishing Wetlands. In 1978 he received the Sierra Club’s Ansel Adams Award for conservation photography, and in 2000 he was voted a Louisiana Legend by Louisiana Public Broadcasting. He and his wife, Sue, live in Baton Rouge.

Be the first to review “CC Lockwood’s Atchafalaya” Cancel reply